Committed to growth. Focused on value.

(Adjusted earnings/loss per share is a non-GAAP financial measure that is reconciled to the nearest GAAP measure in the accompanying schedules.)

Stuart M. Brightman, TETRA's President and Chief Executive Officer, stated, "We saw strong positive momentum across all divisions in the third quarter, especially with offshore completion fluids, onshore water management services, production testing and contract compressions services.  All our divisions reported improved adjusted EBITDA compared to the second quarter of 2017.  GAAP EPS attributable to TETRA stockholders for the quarter was $0.03, a significant improvement sequentially and compared to a year ago.

"Fluids Division revenue for the third quarter of 2017 exceeded $90 million for the first time since the fourth quarter of 2015.  Revenue of $93.4 million increased 5% sequentially and 49% compared to the same quarter of 2016. We completed our latest Gulf of Mexico CS Neptune® completion fluid project during the third quarter, and immediately mobilized to the next project, also in the Gulf of Mexico.  This project is expected to be completed during November.  We also saw a step change increase in water management revenue led by stronger activity in the Permian and the Delaware and MidCon markets.  As a result of this significant increase in activity, as well as improved pricing, we have accelerated investments of additional lay flat hose to take advantage of the strong market.  International offshore completion fluids sales were also very strong, led by higher activity in the Middle East, and led to the highest revenue for this business since the first quarter of 2014.  Fluids Division income before taxes was $24.9 million (26.6% of revenue), while Adjusted EBITDA was $30.8 million (33.0% of revenue).

"Third quarter 2017 Compression Division revenue declined sequentially 5% to $71.6 million, reflecting the timing on the shipment of new equipment.  During the quarter, utilization of our service fleet improved sequentially by 250 basis points to 81.4%. Utilization of our larger horsepower equipment (greater than 800 HP, which are typically deployed on gathering systems) was 90.1%, up from 89.6% at the end of the second quarter of 2017. New equipment orders were $37 million, resulting in a book to bill ratio of 4.9 times and a backlog of $53.6 million.  All these indicators reflect the growing demand from our customers to build out gathering systems in the Delaware Basin and to add capacity to existing systems, particularly in the Permian Basin. We are also seeing an improving pricing environment.  As a result, we have initiated orders for additional large horsepower compressors targeted for gathering systems.  Compression Division loss before taxes was $7.0 million (including a favorable $1.3 million non-cash adjustment to the fair market value of the CCLP Series A Preferred units and a $3.0 million favorable insurance settlement for equipment previously damaged), compared to a loss of $6.2 million in the second quarter of 2017. Adjusted EBITDA was $20.9 million (compared to $17.5 million in the second quarter of 2017).  On October 19, 2017, CSI Compressco LP declared a cash distribution attributable to the third quarter of 2017 of $0.1875 per outstanding common unit. The distribution coverage ratio was 1.56X for the third quarter of 2017.

"Third quarter 2017 revenue for the Production Testing Division increased sequentially by 19%, to $18.9 million, and by 26% compared to the same quarter of 2016, led by stronger activity for both domestic and international.  Production Testing loss before taxes was $1.4 million, while Adjusted EBITDA was positive at $1.1 million (5.6% of revenue). The improvement of third quarter Adjusted EBITDA represented 56% of the incremental revenue over the second quarter, and 39% of the incremental revenue over the same quarter of 2016.

"Our Offshore Services segment revenue improved 12% to $32.7 million compared to the prior year quarter on stronger activity levels and by 16% sequentially, reflecting the seasonality of the business.   Profit before taxes was $0.5 million, while Adjusted EBITDA was $3.3 million. Adjusted EBITDA was negatively impacted by approximately $2 million as a result of Hurricane Harvey in the third quarter."

Special items, including Maritech, that were excluded to arrive at Adjusted EBITDA for the third quarter, as detailed on Schedule E, include the following:

Additionally, a normalized tax rate of 30% is reflected in Adjusted Net Income, as shown on Schedule E.

We expect total year TETRA only adjusted free cash flow to be between $15 million and $30 million in 2017 as we are accelerating investments in lay flat hose to take advantage of strong demand for water transfer services.

No reconciliation of the forecasted range of TETRA only adjusted free cash flow for the full year 2017 to the nearest GAAP measure is included in this release because the reconciliation would require presenting forecasted information for CSI Compressco that is not publicly disclosed.

This news release includes certain statements that are deemed to be forward-looking statements. Generally, the use of words such as "may," "expect," "intend," "estimate," "projects," "anticipate," "believe," "assume," "could," "should," "plans," "targets" or similar expressions that convey the uncertainty of future events, activities, expectations or outcomes identify forward-looking statements that the Company intends to be included within the safe harbor protections provided by the federal securities laws. These forward-looking statements include statements concerning the anticipated recovery of the oil and gas industry, expected results of operational business segments for 2017, anticipated benefits from CSI Compressco following the acquisition of Compressor Systems, Inc. (CSI) in 2014, including levels of cash distributions per unit, projections concerning the Company's business activities, financial guidance, estimated earnings, earnings per share, and statements regarding the Company's beliefs, expectations, plans, goals, future events and performance, and other statements that are not purely historical. These forward-looking statements are based on certain assumptions and analyses made by the Company in light of its experience and its perception of historical trends, current conditions, expected future developments and other factors it believes are appropriate in the circumstances. Such statements are subject to a number of risks and uncertainties, many of which are beyond the control of the Company, including the ability of CSI Compressco to successfully integrate the operations of CSI and recognize the anticipated benefits of the acquisition. Investors are cautioned that any such statements are not guarantees of future performances or results and that actual results or developments may differ materially from those projected in the forward-looking statements. Some of the factors that could affect actual results are described in the section titled "Risk Factors" contained in the Company's Annual Report on Form 10-K for the year ended December 31, 2016, as well as other risks identified from time to time in its reports on Form 10-Q and Form 8-K filed with the Securities and Exchange Commission.

Please note that the above results by Segment include special charges and expenses. Please see Schedule E for details of those special items.

Management believes that following the sale of essentially all of Maritech's oil and gas properties, it is helpful to show the Company's results, excluding the impact of the costs and charges relating to the decommissioning of Maritech's remaining properties, since these results will show the Company's historical results of operations on a basis consistent with expected future operations.  Management also believes that the exclusion of the special charges from the historical results of operations enables management to evaluate more effectively the Company's operations over the prior periods and to identify operating trends that could be obscured by the excluded items.

TETRA net debt is defined as the sum of the carrying value of long-term and short-term debt on its consolidated balance sheet, less cash, excluding restricted cash on the consolidated balance sheet and excluding the debt and cash of CSI Compressco LP. Management views TETRA net debt as a measure of TETRA's ability to reduce debt, add to cash balances, pay dividends, repurchase stock, and fund investing and financing activities.

The cash and debt positions of TETRA and CSI Compressco LP as of September 30, 2017, are shown below. TETRA and CSI Compressco LP's credit and debt agreements are distinct and separate with no cross default provisions, no cross collateral provisions and no cross guarantees. Management believes that the most appropriate method to analyze the debt positions of each company is to view them separately, as noted below.

The following reconciliation of net debt is presented as a supplement to financial results prepared in accordance with GAAP. 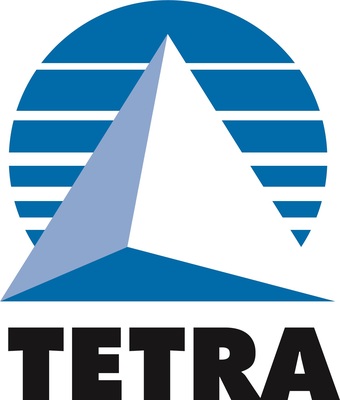 We use cookies to deliver the best possible website experience. By continuing to use this site, you consent to the use of cookies.I understand